Message:Could not retrieve the resource. Error: could not send the HTTP request: Could not execute the request: Failed sending HTTP request

Salvatorian Sisters in the Philippines

We have 113 guests and no members online

SALVATORIAN SISTERS are called to defend A CULTURE OF LIFE...

The SALVATORIANS  make JESUS CHRIST know and loved in our world today...

Save and empower lives.  Be part of the Salvatorian journey!

As the country was nearing to its National Presidential Election there were  so many different religious  and non-government organizations who  concerted efforts for education and advocacy  for a  clean, honest  and peaceful election in the different parts of the country especially in  Metro Manila. The Sisters in the Regional House participated  series of prayer rallies, talks and recollections organized by Major Religious Superiors  and other non-religious groups in the country. The May 10, 2010 presidential election has brought the Filipino people all over the world to be united in prayer for a clean, honest and peaceful election.

The Integrated Pastoral Development Initiative Inc. ( IPDI ) held its first assembly meeting in Lebanon Shelter Conference Room on April 19, 2010 in the Regional House Compound, which was attended by some sisters  especially involved in SPCC. The said organization assist in the growth and development of the  programs  of  Salvatorian  Pastoral Care for Children (SPCC)   in Quezon City. One of the guests was Stephanie Schüller from MISSIO Aachen, Germany who unexpectedly  able to see   the  Lebanon Shelter building which was also under MISSIO funded project. It was indeed a blissful meeting.

SEMINAR ON ACCOUNTING FOR NON-ACCOUNTANTS

The Sisters in the Philippine Region gather together to attend the seminar on  accounting for non-accountants  on April 25, 2010 sponsored  by the new auditor coming from Isidro and Company of the region. The Region is so grateful to Atty. Ponciano Cruz , legal  adviser  and a good friend of the Salvatorians. He encouraged the Regionalate  to have one auditor only  for the   institutions and projects of the Region. He directed the Regionalate to  Mr. Ricardo I. Isidro, the new auditor and a manager of Accountants and Consultants Company.

Sr. Irma Caumeran, SDS took the opportunity to share the congregational council meeting  held in Brazil to the sisters in the region on April 26 2010. It was a whole day sharing of experiences, information, knowledge and learning. The theme “Weaving Salvatorian Life” continues to lead, inspires, challenge and move the Philippine Region into the third step of the process of weaving.  The  congregational council output presented in the   proposal on the four glasses of  organization, lifestyle, spirituality and mission shed light and clearer focus  and direction  of  the  Philippine Region.

The Sisters attended the perpetual profession and first vows of SDS brothers in
Talon, Amadeo on May 1, 2010. Fr. Piet Culpers, the Vicar General of the SDS
Fathers shared an inspiring and challenging homily on vocation and commitment.
After the celebration Fr. Piet Culpers, SDS  and Fr. Paul Portland, SDS
requested a short meeting with the Regionalate team.

The Sisters had their annual retreat on May 2- 8,2010 at the Sisters of Charles
Borromeo Retreat House in Tagaytay. Bishop Teodoro Buhain, D.D. directed
the retreat with the theme “ Weaving Salvatorian Life”. On the last session of
the retreat Bishop Buhain lead us to plan by communities steps to
self-sufficiency where each one has to commit and offered during  the closing
Eucharistic celebration.

The Sisters in Manila and in Cebu volunteered as poll watchers in the different
voting centers. They didn't bothered the heat and thirst from early morning to
evening as long as the votes of each Filipino citizens be guarded and kept safe.

GET TOGETHER OF LOCAL COORDINATORS

The Local Coordinator of the different communities had it's first meeting  this year 2010 on April 27 at the Lebanon Shelter conference room, Quezon City together with the Regionalate team. What a feeling  it is to listen to one another who has shared responsibilities and dreams. The group is looking forward for the next encounter in September 2009 that will be held in Tara, Pangasinan.

The Philippine Region welcomed the new year full of hope and joy for the blessings of the Lord. Effective January 1, 2010 the New Manila community has turned to be the Regional House Community with Sr. Irma Caumeran, SDS as coordinator. New assignments also took effect for the sisters in the different communities and apostolate.

The center of Metro Manila was badly hit by typhoon Ondoy last Sept. 28 and 80 percent of Greater Manila Area and the neigboring cities were underwater. Evacuation centers were set up. Public school buildings and some private schools were open for flood victims and evacuees. Some sisters were actively involved in the facilitation of relief goods and medical missions at the height of the calamity and the process of psycho-social support recovery program until at present in the Diocese where Salvatorian Sisters are working . 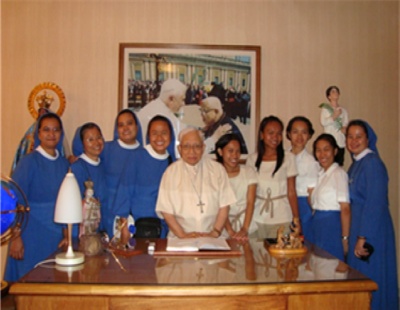 Sr. Irma together with some Sisters in Cebu community, Novices and SPCC Cebu staff visited His Eminence Ricardo Cardinal Vidal Archbishop of Cebu in his residence in D. Jakosalem St. Cebu City last March 24, 2009. He gave his blessings and wished for more vocation in our congregation
StartPrev6789101112131415NextEnd